Make sure you always use the latest firmware version, to get all the latest features & improvements!

How to update your firmware

The PicoMic microphones will have their firmware updated automatically when they are put back on the receiver.

Not enough space on the PicoStream USB drive!
After several updates, you may not have enough space on the PicoStream USB drive.
This is because MacOs and some Windows versions will create a hidden trash folder that takes all the space.
In this case, you will need to format the PicoStream USB drive – check the procedure here.
I am stuck on the Firmware Update Needed screen
This problem can happen when the firmware file is not recognized by the receiver, usually because of one of these issues:
(a). The file name of the update is not exactly fw_rx2.par (for example, it is fw_rx2(1).par)
(b). The transfer of the file to the USB drive didn’t finish completely ; or the USB drive was not ejected properlyConnect the PicoStream to your computer ; delete all the files on the USB drive and copy the firmware update again.
Do not change the name of the firmware file ; it must be fw_rx2.par, otherwise it will not work!
Make sure to wait until the transfer is finished and you properly eject the USB drive.
If it doesn’t fix the problem, please follow the factory reset procedure.

We introduced a new assistant screen, to help you configure the PicoMic receiver output settings. 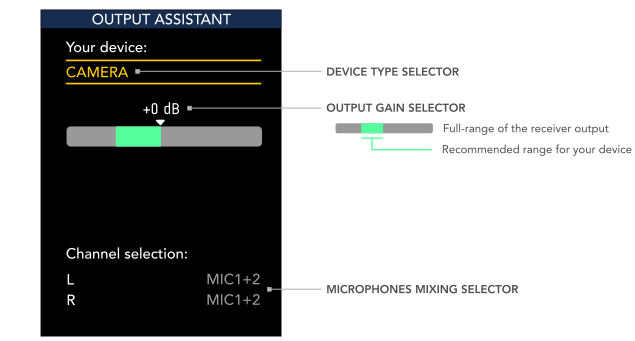 Common devices, such as the Panasonic GH5 and the Sony A7III, are provided in the devices list, with preset optimum gain settings.

The PicoMic is now able to capture the full audio spectrum down to 15Hz – giving a more natural tone to voice and music.
An optional 100Hz high-pass filter can be enabled to reduce low-frequency noises such as A/C, fan noises, etc. if needed.

We got many requests to improve the limiter quality and reduce the audio distortion – done!

We changed the gains display, so that 0dB is now a mid-range gain and is the default, recommended value.
For example, a mic gain of +18dB on the V1.x firmware corresponds to a gain of 0dB on the V2.x firmware, for the same audio level.
This brings the PicoMic receiver closer to common audio devices.

The transition is made automatically when you update the firmware.

Including range improvement for some devices, and many bugfixes.
We highly recommend that you update to this version!