Before you can use your PicoMic wireless system, make sure to:

The PicoMic receiver can work with many devices, including:

All these devices can be connected to the receiver using the provided adapter cable.
This cable will work both for audio devices (TRS mode) and for smartphones (TRRS mode).

To properly setup the output type and gain, enter the Output Settings Menu by selecting the Audio Output on the main screen. 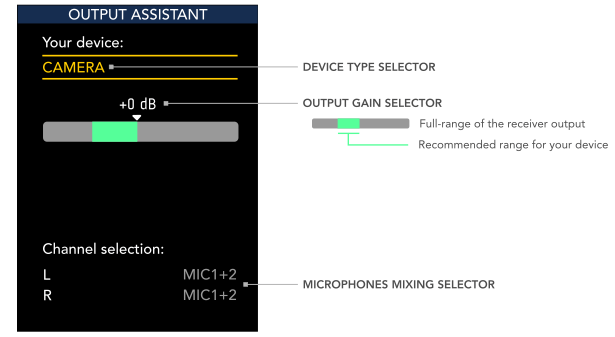 Select your device type or model – this will automatically select an optimal gain range for the receiver audio output.
If you find that the gain is too low or too high, you can adjust it within the recommended range.

Your camera must have a 3.5mm mic input connector.

You have two ways to set the PicoStream output gain / level to fit your camera’s input one:

Go in the Output settings menu, and select CAMERA as your device type.
Now, press DOWN and ENTER so you can edit the output gain manually.

On your camera, go into the microphone input settings:

Grab a PicoMic and blow into it so as the microphone is saturating ; meanwhile, check the audio level that you get on your camera’s VU meter.
Adjust the PicoStream output gain (initially at 0dB) lower or higher so that the camera VU meter is almost to the top, like so: 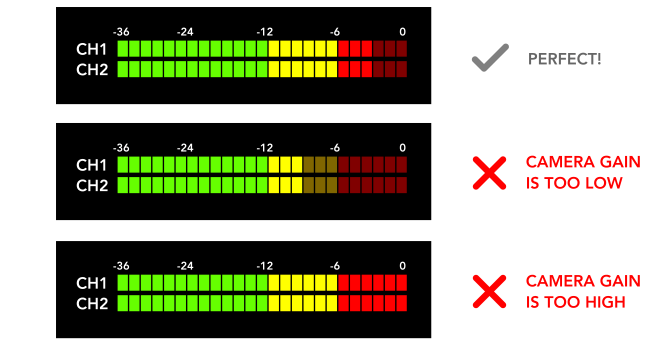 It’s done! You now have the best settings both for the camera and for your receiver.
This procedure will make sure that the camera input gain is at the lowest possible level (minimizing its input amplifier noise) ; and the PicoStream output level is exactly right so your camera input will not saturate (even when the PicoMic goes to its maximum level).

With a 3.5mm audio connector

Many audio recorders have a 3.5mm microphone input, such as the Zoom H4n: 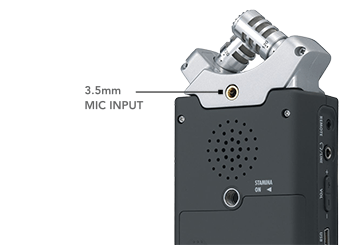 Select CAMERA as the device type (or your recorder model, if it is listed).

Adjust the recorder input level so that you are in the -6dB zone when you blow into a PicoMic: 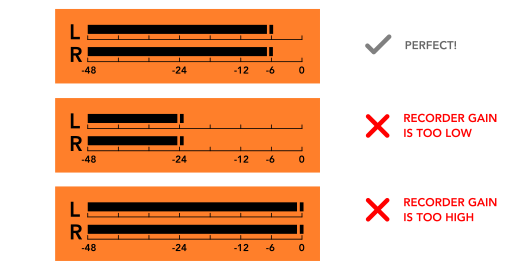 With an XLR connector

You must use a TRS to dual XLR cable – we recommend using this cable.

Connect both XLR connectors to your audio recorder, and follow the same procedure as above to set the intput level.

Warning! Make sure to disable Phantom Power!
Phantom power has a high voltage of 48V that can damage your PicoMic receiver. The PicoMic receiver has its own battery and doesn’t need any power from the audio recorder.

Your smartphone must have a 3.5mm audio connector.
If it doesn’t have one, you need a USB-C to 3.5mm audio adapter (it is normally provided by the phone manufacturer).

Select SMARTPHONE as the device type.

My phone doesn’t detect the external microphone!
Some phones might not detect that an external microphone is connected, even after several tries.
In this case, a suggested solution to try is using a TRS to TRRS cable (such as this one) and using the PicoMic receiver in CAMERA mode.

You need to make some tries and samples recordings. You may need to manually adjust the PicoMic receiver output gain (initially at 0dB) to get proper audio without background noise.

Smartphones usually have poor microphone inputs, have no VU-meter, unpredictable input gains and generally are not the best option when you are looking for good quality audio. Moreover, they support only MONO recording, so you can’t separate the MIC1 and MIC2 microphones.

If you would like a better setup while still using a smartphone, we recommend using a digital smartphone mixer (such as the Roland GO:MIXER PRO) to get better control and a better quality. You can even use up to 4 simultaneous microphones by connecting two PicoMic receivers to the mixer. 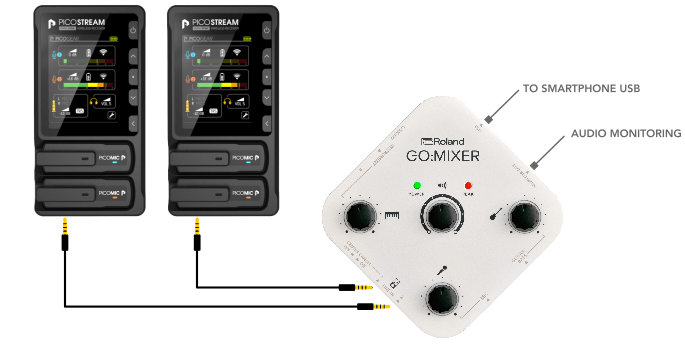 In this case, use the LINE OUTPUT device in the PicoMic receiver configuration.

You can pair a PicoMic as MIC1 or MIC2.

What if nothing happens?

The connection is made automatically as soon as the PicoMic is removed from the charging dock of the receiver.
Obviously, your microphone must have been paired previously. 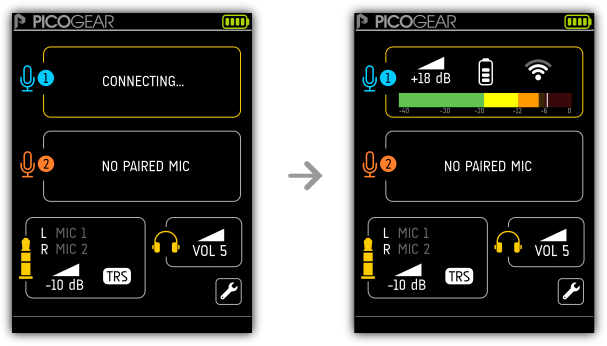 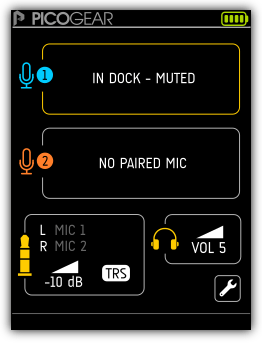 The color of the microphone LED indicates its assignment at the receiver:

Enter the Microphone Settings menu by selecting the MIC1 or MIC2 box on the main screen.

You can change the microphone sensitivity to adjust to your environment.

The microphone gain can be set between -18dB and +12dB.
The default and recommended value is 0dB.

Generally, the gain should be set so that the audio level on the meter is always included in the central area:

An optional digital 100Hz high-pass filter can be enabled.
It removes all audio frequencies below 100Hz, reducing the background noises such as A/C, fans, etc.

This is a basic noise gate, that reduces the audio volume when the PicoMic detects no speech – allowing to reduce the background noises in calm environments (eg. indoors interviews).

We don’t recommend enabling the noise gate in outdoors environments, since the speech detection might now work well and your audio might get unusable.
In such cases, if you would like to reduce background noises, we recommend using a post-production noise reduction, such as the one provided in Adobe Audition.

You can mute a microphone at any time when it is connected.

This will not only mute the microphone on the receiver, but also disconnect the radio link between the receiver and the PicoMic.
The PicoMic will go into low-power mode, consuming almost no power.

The microphone status will change to MUTED on the main screen as well: 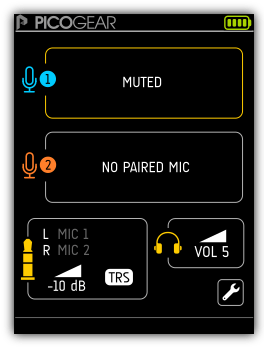 Any any time, you can re-connect to the PicoMic by setting the MUTE to OFF.

The PicoMic includes a built-in audio limiter that will prevent any audio clipping if the audio level is too high.

Typically, it engages as soon as the peak level goes up to 0dB (the extreme right of the VU-meter) ; and it will dynamically compress the audio so that it never exceeds the 0dB range.

The audio limiter can’t be disabled – you should never have audio levels this high.
If you consistently go into the red zone in the VU-meter, you need to reduce the mic gain.

You can expect the following battery duration:

Once the receiver is charged, it will use the USB as a power source – so you can have an external power from a wall adapter or a USB power-bank.
It will also charge from a USB power-bank without problems.

To charge your PicoStream receiver, use the supplied USB cable and connect it to any USB charger (wall charger, computer, power bank, etc.).

The receiver can be charged while being in operation. This is especially useful if you want to extend the battery life using a power-bank, for example.

The microphones charge when they are placed in the PicoStream receiver’s magnetic charge dock.

The microphones charge only when the receiver is charging itself and its USB cable is connected to a power source.
The LED flashes yellow when charging is in progress, and turns green when charging is complete.

Make sure to charge your PicoMic at least once a month.
Leaving the PicoMic dicharged for a long time might lower the battery capacity.

Using 2 receivers at the same time

You can use two receivers and 4 microphones at the same time without interference.
Go to the Settings menu, and select the following RADIO BANDs:

If you are using a single receiver, set the RADIO BANDS to ALL.

Make sure to leave a few inches between the two receivers – else, they may interfere between each other.